Fourth of July in NOLA 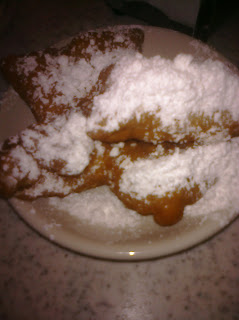 Every year I spend the Independence Day Holiday in New Orleans with a group of my girls, this year was no different. Though, when the excursions to New Orleans for this exciting weekend began in 2004, there was more partying and less relaxing and enjoying the local scene. The weekend always is centered around a great event that Essence Magazine hosts every year, the Essence Music Festival. Now that we have been there and done the crazy parties, this year we decided to change it up. Don’t get me wrong we are up for a party if we feel the need. What I mean, is we finally got tired of doing the Essence Music Festival the same way every year. We would do the same things, eat the same things and hang out in the same areas.

This year we decided, to skip the parties and focus on enjoying New Orleans. Rather than getting our beignets from Cafe Du Monde in a bag to go; we sat down and enjoyed them and enjoyed the music and the crowd. 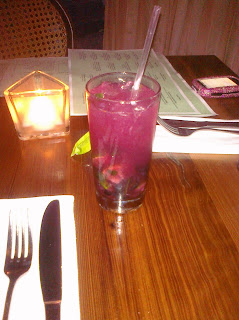 And the main change that we made was to dedicate an evening to leave the city center and enjoy a great dinner. After doing a little research on yelp.com. I stumbled upon this little restaurant in the Garden District called Dante’s Kitchen.

Dante’s Kitchen is a quaint restaurant situated on what appears to be a neighborhood street, in the Garden District of New Orleans, not too far from Tulane University, 736 Dante St New Orleans, LA 70118. The night that we had reservations for, was completely booked, we were seated by the door and could hear the owner/host telling the walk ins that he couldn’t accommodate them…great sign for us. So I started with a mojito, hey I’m in NOLA! But rather than a traditional mojito, I had a blueberry variation, that was delicious. 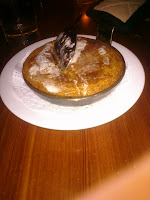 Dante’s service is great, our waiter made great suggestions for us. I started with the Grilled Shrimp and Stoneground Grits. I had had shrimp with the heads on, so that didn’t turn me off at all, and the grits were perfect. So perfect I cooked my own version of a recipe I found on line when I returned home, check out my handy work. In the typical southern fashion, Dante’s serves cornbread in a miniature cast iron skillet. But in not so typical fashion the cornbread is a molasses cornbread with honey butter on top. In a word…YUM!! In fact the couple next to us didn’t eat theirs and we overheard the owner asking about it, and we said, if they don’t want it we will take it. He thought we were joking.

Next for the entree, we decided to get the Roasted Chicken Under a 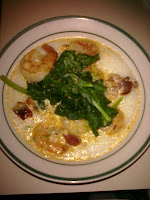 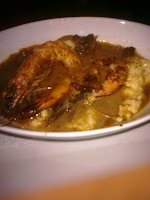 was served with a potato hash, with a fried egg. This entree was delicious, the chicken had some sort of sweet seasoning, and when I broke the yoke on the egg, it mixed with the chicken jus and made a great sauce. The potatoes had a little bit of bacon, added to it. everything went together very well. I was apprehensive of the egg, but it worked. And as you can see the portions are not skimpy, but quality is not sacrificed for quantity.

Dante’s prides themselves on cooking local products, and so not only is the food down home elegance, so is their hospitality. The owner/host had the cab called and walked us to 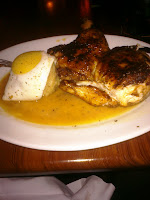 our cab at the end of the evening. What a great night.

The weekend was about, music, family, friendships, food, and FUN, if you are up for it we will be in NOLA next year, same time same place, new restaurant visits.